Halfway through the year…what’s next?

Halfway through the year…what’s next?

On the last day of every month, I like to retreat to a remote cabin in the woods and think about what has gone on over the past month.  Reflect on my successes and my failures, what has changed and what has stayed the same.

Apologies, I misspoke above.  I meant, I would like to do that.  I actually look at the calendar and say “My god, is the month over already?!”

Today is the end of the first half of 2017 and tomorrow is the start of the 2nd half.

I thought that for once, I’d actually stop and reflect back on what has taken place.  In fact, I’ll go a step further and think about the year so far and what might happen over the next six months.

Without a doubt, 2017 has been an interesting year so far.

We had an absolutely frantic first three months in the real estate market.  The general consensus amongst Realtors I spoke with was that what normally took place in the spring market of April, May and June took place instead in January, February and March.

Incredibly low inventory and a fear that the spring market would bring more buyers into play made pretty much everything sell very quickly for good money.  We saw record high sales in a number of areas and it got so frenzied that the Ontario government stepped into the fray in April with the Ontario Fair Housing Plan.

I’ve had a number of people ask me if the government interjection is what caused the market to shift.  I think it’s more fair to say that the market was already starting to shift when the Ontario Fair Housing Plan came out.

In essence, by the time the outcry grew loud enough that the government felt compelled to act, the buyers in the market were giving up.  In the months leading up to April, I had a number of buyer clients tell me they just needed to step away from their search for a home.  The frenzy, the massive levels of competition and the price increases were just too much for them.

Combine this buyer fatigue with sellers who were attempting to cash in (or is that cash out?) on the seller’s market, flooding many geographies with a substantial increase in houses.  How substantial was the increase, you ask? 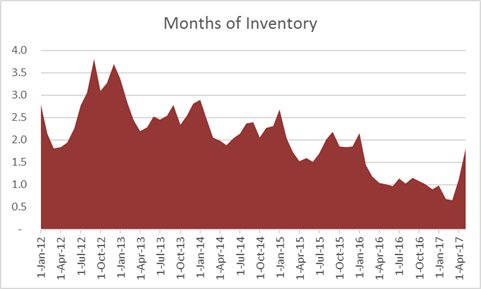 So if September, 2012 was the highest we’ve had in the last 5 years, what is the lowest?

You see that spike at the end of the chart?  Let’s look a little closer at the last 12 months. 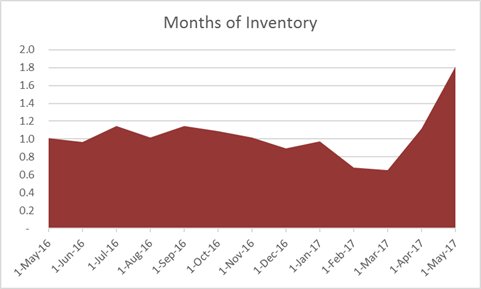 In April, 2017, the months of inventory went up from that 0.65 to 1.11, just shy of doubling.  In May, it went up to 1.81, another very healthy increase.  We don’t have the June numbers yet but I think we’re going to see that trajectory continue upwards.

Let’s turn our attention to the 2nd half of the year.  What will the summer and fall bring for our GTA real estate market?

We are still far from a balanced market of six months of inventory but we are backing away from the absolute frenzy of a total seller’s market.

As always, looking at the market as a whole can make you miss out on what’s going in particular segments.

From a geographic standpoint, some of the areas that saw those massive price increases are now seeing substantial price decreases or a general stagnation in prices.  Newmarket, Aurora, Markham and other areas that saw huge jumps in prices earlier this year are now seeing properties sitting on the market.  I’ve heard of a number of deals that are failing to close because of lower appraisals as lenders become more conservative and worry about the value of the properties they are financing.  In some cases, buyers are attempting to renegotiate the purchase price after the fact.  While sellers can refuse, some have seen drops in value in the $200K to $300K range and accepting $100K less than the signed agreement is more appealing than placing the property for sale again in a changed market.

Different pricepoints are seeing very different levels of demand.  I’ve encountered properties in the $500K to $700K range having great difficulty attracting potential buyers or selling at all.  On the low end of the price scale, properties in the below $400K price point continue to attract strong interest and still sell in days rather than weeks.

With rumoured increases to the prime rate coming as early as July, lenders are already starting to increase interest rates, which will serve to further push more buyers out of the market.

I believe that we will see another month or two of sellers holding firm to their price expectations, resulting in longer times on market and a number of terminated listings.  By September, the listings that go on the market will be sellers who are motivated to sell, not sellers who are wanting to take advantage of the market.

If you or someone you like are considering buying, reach out to me soon so we can chat.  Getting you pre-approved with a locked in mortgage rate is a very smart idea and there will continue to be some good opportunities in certain areas and price points over the next couple of months.

If selling is more of the focus, then make sure you’re working with a Realtor who understands what is going on in the market and can get your home sold to a qualified buyer at a price that you’re happy with and that will actually close.

Whether you or someone you like are looking to buy or sell, I’d love to be responsible for what comes next.

Have a fantastic Canada Day!

The success of a room depends to a great extent on the position of the doors.  If the doors create a pattern of movement which destroys the places in the room, the room will never allow people to be comfortable.

Think of your favourite room in the home you grew up in.  Now, think about where in the room the door was located.  I would wager that it was likely not in the middle of the wall but rather towards the corner of a room.  While it may seem like good symmetry to place a door in the middle, it has the effect of making furniture hard to place and the room hard to enjoy.