How does a change in interest rates impact you?

How does a change in interest rates impact you?

Nothing says summertime like a warm evening, a cold beer and an animated discussion about interest rates.

If you had told me years ago that I would consider the topic of interest rates…well, interesting, I would have told you that you’re crazy.  I then would have said I had to go because my friend was waiting for me at Blockbuster and if I don’t arrive soon he’ll have no idea where I am and no way to reach me.

It’s now June, 2017 and I defy you to find me one person who doesn’t think interest rates are fascinating.  OK, two.  OK, 5 million.

I suppose we find them fascinating because a change in interest rates impacts us personally.  I feel comfortable saying “us” because if you weren’t into reading about interest rates, you would have already deleted this email and got on with your life.

Whether it is mortgage rates or the interest charged on other money we owe to lenders, a change in interest rates can have a big impact on the cost of that debt.

There are often lots of headlines about the levels of debt among Canadian households and it is nice to put some real numbers into the equation.  RBC Economics Research released a Debt Dashboard in June, 2017 and as far as articles go from banks, it’s a pretty easy read.  You can find the full article here but I wanted to show you a chart about debt levels in dollar terms.

The below chart shows that about a third of Canadian households are debt free and that three quarters owe less than $100K. 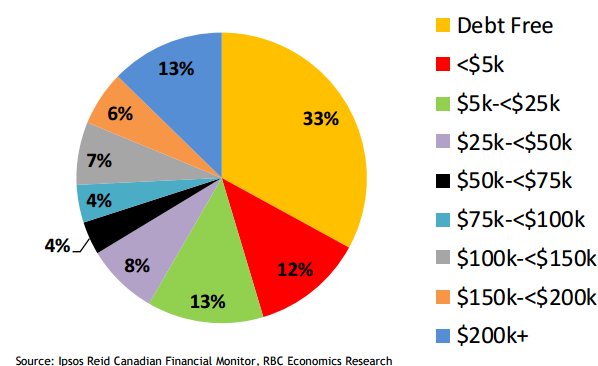 Obviously, this doesn’t include mortgage debt.  Interestingly enough, only about 1/3 of Canadian households have a mortgage, while home ownership rates are close to 70%.  Our demographics with an aging population influence this statistic, as more people who’ve owned their homes for a long time means more original mortgages have been paid off.

On the mortgage side, a change in interest rates can dramatically impact the cost of servicing that debt.  Earlier this week we had some indication that an interest rate increase is likely coming, when Bank of Canada Senior Deputy Governor Carolyn Wilkins made some comments about economic growth in Canada being “pretty impressive” and that further signs that economic growth is broadening would lead the central bank to consider whether current low rates would still be required.

This wasn’t an official policy interest rate announcement from the Bank of Canada but it sets the stage for a possible rate increase.

Back in 2011 I wrote an article about how mortgage rates are determined  and I’m proud to say that it remains as fascinating today as it did back then.  I did notice I reference an upcoming article at the end of it that I never actually wrote.  It’s only been about six years and I’m sure I’ll get to it within a decade.

The article talks about how a change in the Bank of Canada overnight rate impacts the interest rates that lenders charge on mortgages.  We see these policy interest rate announcements 8 times a year.  The scheduled announcement dates for 2017 are:

Most pundits aren’t predicting a mortgage rate increase for the July 12th announcement but a few are saying that by September we may see the overnight rate rise.  It’s currently at 1/2 a percent and the bank rate is correspondingly at 3/4 a percent.  A change in these rates impacts the one that we talk about most, namely the bank prime rate, currently at 2.7%

A change in the bank prime rate is going to impact the cost of variable rate mortgages.  Historically, variable rate mortgages have done better than those who opted for a fixed, locked in rate.  Now, historically, people slept when it was dark outside and lived to be about 30.  As I often say in my articles, we need to consider the specifics of what is happening now rather than talk about things in general.

When interest rates change, they often (but not always) change in 25 basis points (a basis point is 100th of a percent) increments.  If the bank prime rate is increased by 25 basis points, it means that that same variable rate of 1.8% goes up to 2.05%.  The discount is the same but with a higher prime rate, you pay more interest.

As variable rates get closer to fixed rates, the savings decrease and the risk level increase.  Many variable rate mortgages have the provision to lock in your rate if you decide that is the right approach.  The rate offered is a function of what is going on in bond markets and predicted interest rate changes.  As a general rule, locking in a variable rate the day after you start that mortgage is going to be more expensive than starting off with a fixed rate mortgage.

Let’s see what happens with increases to the prime rate on a mortgage like that.  All calculations are done with a 5 year term, 25 year amortization period. 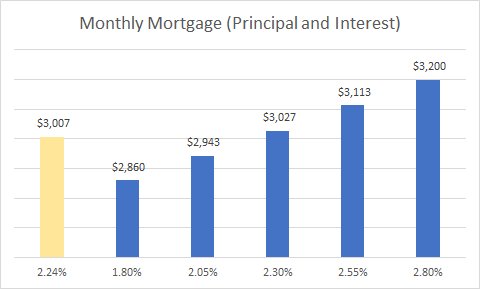 The gold column on the left is the fixed option at 2.24%.  We start with the blue columns at the current lowest variable of 1.8% and move up in 25 basis point increase increments.

When we look at what happens over the 5 year term, the impact of the change in interest rates is more meaningful.  As our monthly mortgage costs go up, the ratio of how much of that payment goes to principal and how much goes to interest also changes, with more of the increased payment going to interest. 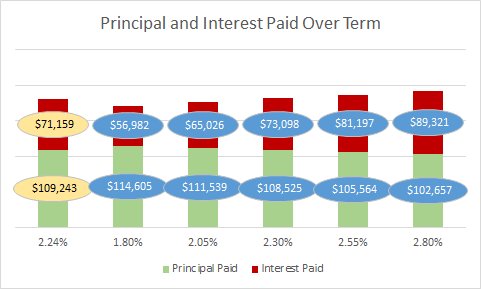 If we look at the principal being paid over the term, we see that the lowest variable rate of 1.8% pays off about $114K in principal over the 5 years of payments.  That’s about $5K better than the best fixed rate of 2.24%.

By the time the variable rate hits 2.3% (a 50 basis points or half-percentage rate hike), the principal paid is less than the fixed rate.  That’s only logical given the rate is higher, but it shows us that it won’t take much in the way of increased interest rates before the current fixed rates are the most attractive.

If you are considering what to do with your mortgage and want to talk to a knowledgeable mortgage broker, let me know.  I work with a great one and he’s helped a number of my clients out.

If you’re thinking about buying or selling real estate and want to work with a Realtor who understands how mortgage rates will impact house prices and your options, please get in touch with me.  I’d love to be responsible for what comes next.

LIGHT ON TWO SIDES OF EVERY ROOM

When they have a choice, people will always gravitate to those rooms which have light on two sides, and leave the rooms which are lit only from one side unused and empty.

This design lesson is one of my favourites because it is a fantastic example of something that is obvious yet goes unnoticed.  More so than almost any other factor, the presence of light on two sides of a room impact the success or failure of the room.

Look around your home and see which rooms you love and which ones you tend to not spend time in and I will bet you that this lesson holds true!