I know you’re worried about me.

I know you’re worried about me.

Over the past few weeks, I’ve had a few emails and calls from concerned clients and friends.  The concerns seem to fall into three broad camps.

I appreciate the concern and I thought I’d nip this in the bud by addressing your concerns.

With the exception of my lawn issues, the concern comes from recent media stories that focus on the most extreme examples of the shifting market.

Buyers walking away from deals due to financing problems or deciding they overpaid for the property, sellers who’ve moved out suddenly having to relist their home and carry two mortgages – it sounds like a nightmare.  High emotion, lots of money and lawsuits flying back and forth.

Based on these stories, you’d be forgiven if you thought that the majority of real estate deals done in the last few months have run into closing problems.

The reality is that much like the sensational stories we saw last year about bidding wars with 45 offers on a fixer upper in a bad neighbourhood, a deal falling through is still far from common.

The likelihood of a deal falling through after a firm purchase is primarily related to what happens in the market after the sale but before the closing date.

When sale prices drop after someone buys a home with a firm deal, they’re still legally obligated to buy that home.  Ask any lawyer if “legally obligated” means it will absolutely happen and they will likely tell you no, it just means the buyer is obligated to close.

Deals that fall through because of a tumble in sale prices happen either because the buyer chooses to not go through with the purchase and deal with the consequences or they can’t go ahead with the deal because of financing.

In the first case, some buyers look at their deposit that the seller’s brokerage is holding, they look at the drop in prices and if they see that the drop is bigger than the deposit, they decide to walk away.  Sellers have the ability to sue to keep the deposit as well as for damages in the amount of the difference for the sale price to someone else, presumably at a lower price.

In the second case, the buyer still wants the property but financing is no longer possible.  While a pre-approval is a crucial step in buying a home, lenders absolutely look to appraisals to make sure that the property against which they are lending funds is in fact worth what the buyer paid for it.

When the average sale price drops considerably, appraisers look at other comparable property sales in the area and if they find lower values, they will very likely appraise the property at less than the purchase price.  When that happens, the buyer needs to come up with the difference in the form of a larger downpayment.  If they can’t, then they have bought a property that they can’t pay for on closing day.

In either case, a legal obligation to honour the terms of the purchase doesn’t mean it will close.  It means it has to close, but if the buyer decides not to close or can’t provide the money, the deal falls through and the seller sues the failed buyer.  Of course, that doesn’t get the house sold, so the seller and their agent start the process of relisting and finding another buyer.

I compiled the change in average sale prices across the GTA as well as for Toronto, Dufferin, Peel, Durham, Halton, Simcoe and York.

The charts below show very different stories in these different areas.  When you look at the charts, make note of two things.

The first is the peaks and valleys.  When there is a high increase in average price followed by a big drop, you will have buyers who run into problems with their financing or choose to walk away from their deposit and the deal.

The second is the timing of the changes.  When the drop in average sale price is within the last few months, we still have deals that haven’t closed yet.  The majority of deals are between 30 to 60 days, so the properties that sold in March for a high price right before a significant drop have mostly either closed or failed to close already.

A long closing can certainly exacerbate the impact of any shift in the market.   The longer the closing, the higher the possibility of the market shifting before the keys to the property actually exchange hands.

Let’s look at the charts to see what is happening in different areas.  All of the charts are on the same scale so we get an apples to apple comparison. 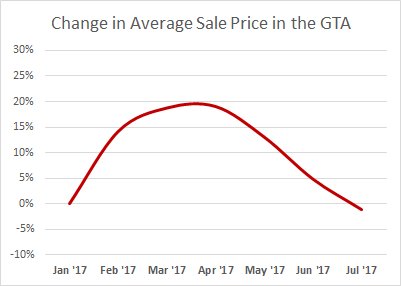 As is to be expected in as broad a geographic area as the Greater Toronto Area, the chart doesn’t show the major peaks or valleys of the regions that comprise it.  We see it rising to a peak in April, 2017 and as of July, 2017 it’s pretty much back at the same average price point as it was in January, 2017. 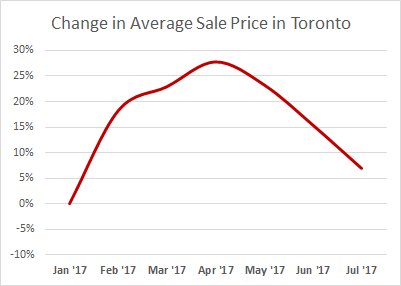 Toronto saw some crazy price growth in the first couple of months, a bit of a calmer period in May, then reached it’s height in April, 2017.  Since then it has been dropping but is still up about 7% since the start of the year. 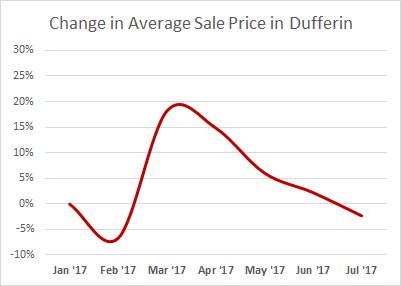 Dufferin bucked the trend a bit and actually had a price drop in February, but then saw a huge jump in March, 2017, with the average sale price going up over $100K.  Starting in April it started falling and as of July, 2017 it is down 2% compared to the start of the year. 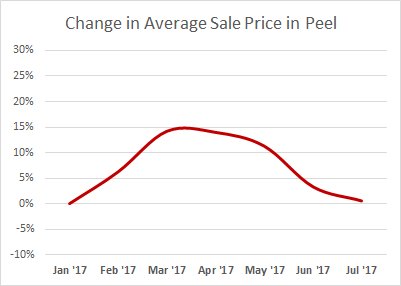 Peel has been one of the calmest markets in the GTA this year.  It saw a highest percentage increase of about 14% in April and as of July, 2017 is up about 1% compared to the January, 2017 average sale price.  Peel did see about an 8% drop in average price (about $60K) in June, which means we may see some ongoing stories about deals falling through there for those that bought in late May or early June. 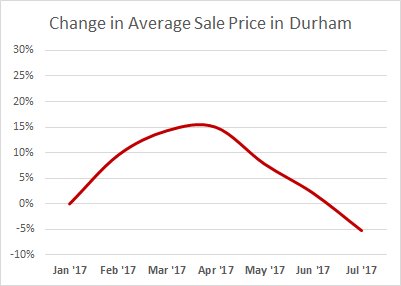 Durham is the other relatively calm market in the GTA this year.  It saw a highest percentage increase of about 15% in April and as of July, 2017 is down about 2% compared to the January, 2017 average sale price. 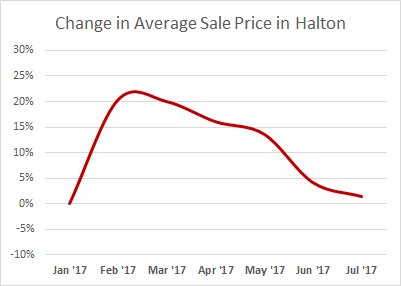 Halton saw a strong start to the year with a 20% increase in February, 2017.  It has been sliding down ever since and saw a 10% drop in June (about $90K), which means we might continue to see some deals falling through in the Halton region.  July, 2017 is pretty close to the average sale price back in January, 2017.

Simcoe has been a bit of a wild ride, with a more pronounced series of increases through February and March, then a slight dip in April and again in May, before a big drop of 13% (about $90K) in June.  July continued to slip and compared to the start of the year, the average sale price in Simcoe is down about 4% so far. 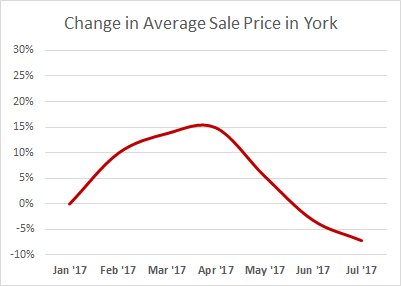 As we can see from this review, it truly is a different story in the different markets.  I will be updating these charts as we move along in the year so let me know if you want the latest news on the big picture in your area!

If you or someone you like is considering buying or selling, make sure you work with a Realtor who understands what is going on in your area.  If you need help, please don’t hesitate to get in touch.  I’d love to be responsible for what comes next.

There is a special beauty about tents and canvas awnings.  The canvas has a softness, a suppleness, which is in harmony with wind and light and sun.

Before I read this rule, I tended to think of canvas awnings as a cheaper version of a “proper” covering.

This rules talks about how when there are spaces that need softer light or partial shade in summer, or partial protection from mist and dew in autumn, they can be tremendous appealing.

Canvas awnings over windows that face west and south can soften harsh light and in general can reduce air conditioning and heating costs while adding character to the exterior of the home.