The Cost of Risk: How Mortgage Rates are Determined

The Cost of Risk: How Mortgage Rates are Determined

For most people, the reason why mortgage rates change is a complete mystery. While the idea that a person with a good job and good credit can get a good mortgage rate is clear, the changes in mortgage rates can seem arbitrary. Will mortgage rates rise or fall this year? Should I lock in now or wait until later? Is fixed a good idea or should I go with variable?

It is a confusing situation on the surface but the good news is that there are actually only two factors that influence mortgage rates.  The factors are:

1. The cost of funds (today as well as later); and
2. The lending environment.

At its most basic, lenders are in business to make a profit. If there was no competition, lenders could charge what they want for mortgages. Fortunately for those of us looking to get a mortgage, a competitive marketplace keeps rates low in good times and reasonable in bad times.

Let’s take a look at the two main types of mortgages – fixed and variable – and how the cost of funds and lending environment impacts rates.

This type of mortgage, with a single interest rate set for the term of the mortgage, is the most popular in Canada.  The November, 2011 Annual State of the Residential Mortgage Market in Canada from CAAMP shows that 60% of mortgages in Canada are fixed rate mortgages.

In order to make a profit, lenders need to charge enough so that they make more from you than their cost for borrowing that money. While we may perceive lenders as simply having the money and loaning it to us, lenders are themselves typically borrowing the funds. In today’s market, that is normally from selling what are known as mortgage backed securities.

There is an entire industry following the bond market that focuses on predicting changes in the bond rate and it is from these predictions that 1, 2, 3, 4, 5, 7 and 10 year bond rates are set, which in turn dictate the basic mortgage rates for those terms.

For fixed mortages, the lending environment that is relevant is the activity in the bond market, particularly the investment grade corporate bonds.  Broad economic and environmental factors influence our perception of risk and the return we need in order to justify that risk.

In simple language, if an investor is deciding between investment grade corporate bonds and mortgage backed securities, he looks at which has the most risk.  While in general both are supposed to be equal in risk, the reality is that there are fluctuations in perceived risk.  If investment grade corporate bonds are perceived as safer than mortgage backed securities, lenders need to offer a bit higher a rate in order to get investors to buy.  When that happens, lenders increase the mortgage rates they offer consumers.

If the reverse is true and investment grade corporate bonds are perceived as riskier than mortgage backed securities, then lenders can offer a comparable rate and have investors buy in.  In such cases, lenders keep the mortgage rates the same or perhaps even lower the rates a little.

It is this combination of perceived risk in the lending environment and the cost of funds (both now as well as the anticipated cost later) that influence fixed mortgage rates.  Let’s turn now to variable rate mortgages, which have different influences within the same factors.

This type of mortgage, with an interest rate that changes over the term of the mortgage, is the other popular mortgage type in Canada.  The November, 2011 Annual State of the Residential Mortgage Market in Canada from CAAMP shows that 31% of mortgages in Canada are variable rate mortgages.  (The remaining 9% are more complicated, mixed versions.)

As the name variable rate mortgage implies, the rate you are paying changes over time. In this type of mortgage, the lender does not need to worry about the anticipated cost of funds later as if their costs go up, so does your rate. How then, do you as a consumer, understand what causes the variable rate to change?

All variable rate mortgages use what is called the bank prime rate as a starting point. This is a rate that is mostly constant across all lenders and is itself based on the Bank of Canada overnight rate. The overnight rate is the interest rate at which major financial institutions borrow and lend one-day (or “overnight”) funds among themselves. Financial institutions set their own bank prime rates based on this overnight rate and on competitive pressures among themselves. 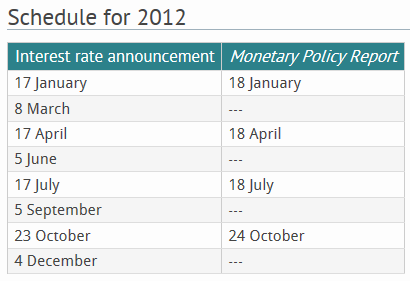 and apart from the announcement of what the rate now is, each announcement is scrutinized to try to determine what will happen in the future.

For variable rate mortgages, we now see that the risk attached to cost of funds at a later date is effectively removed.  By signing you up for a variable rate, lenders assure themselves that whatever the changes, they can pass those changes on to you.  As such, the other factor influencing the rates – the lending environment – is what remains.

As discussed, lenders use their bank prime rate and offer variable rate mortgages based on it. Competition amongst lenders, however, dictates whether lenders offer below prime, at prime or above prime rates. While collusion is not permitted, in such a tightly interwoven marketplace, competition forces lenders to adjust very quickly to rate changes by other lenders.

This means that while Bank of Canada rate changes will certainly change the variable rate of your mortgage, competition between lenders will also affect what rates are offered for variable rate mortgages.

While setting mortgage rates is by no means a simple process, understanding that the cost of funds (today and later) and the lending environment are the influences that effect what you as a consumer pay for your mortgage is a very useful concept.

In addition to these macro influences, your personal situation also influences the rates you are offered. If you want to learn about how your situation influences what mortgage rates you can get, check back soon my new article It’s Not Me, It’s You: The Six Factors that Decide Your Mortgage Rate.

If you are interested in exploring your mortgage options for a purchase or refinancing, then I invite you to contact me to discuss it further.