What happens when interest rates go up?

What happens when interest rates go up?

Unless you’ve been hiding under a rock, you can’t have missed all of the stories about interest rates in the news lately.  With inflation in Canada hitting a 31-year high and housing prices a major topic of conversation in both backyards as well as campaign platforms, we’re entering into a very unusual period of change around interest rates.

As Realtors working with clients buying and selling property, our major focus is, of course, how such changes influence real estate.  It’s not a theoretical question for us or our clients, as understanding the impact of interest rates on real estate has a tremendous impact on how to proceed with a purchase or sale.

We’re going to try to avoid being overly technical on how interest rates are determined and what impacts them, and instead focus on the result of changes.  That being said, it’s worth us sharing a quick overview of some key terms.

Now, back to what it actually means when interest rates go up.  We’ve considered the question and we’ve got three things you should know.

Here’s what happens to the number of sales.

We’ve been working with clients since 2010 and during that time, we’ve seen some relatively significant changes in interest rates.  We say relatively as it appears that the period we’re entering into now will make those changes appear positively insignificant.

Our experience in working through times of interest rate changes is that it always causes a dip in sales activity.  In times of uncertainty, some buyers and sellers decide to take a step back and wait and see what happens.  Buyers or sellers who have strong reasons to transact on a property still do so, but people who do not have an urgent, time-sensitive need to buy or sell will often take a cautious approach during times of change.

The Toronto Regional Real Estate Board has reviewed what higher interest rates have on the number of sales that take place, and it follows what our experience has been working with clients in the market.

The big take-away from the chart above is that in the short-term, sales decline by an average of about 11% as the market adjusts to the new reality of higher interest rates.  Within two years, the average sales level has gone up by 14% from the level it was at before the higher interest rates began.

Using the analysis from the chart above, we would expect to see the level of sales activity (adjusted for seasonal differences) drop as of March, 2022, yet by March, 2024 we will have rebounded to higher sales levels.

When we look at the number of sales in Toronto in March 2022, while we are up on a month over month basis, on a year over year basis, we’re down over 22%.  April should see a similar story where we see a much weaker spring market in terms of overall sales than is typical in Toronto.

The simple answer to the complicated question of how rising interest rates impact real estate sales, is that sales go down for a bit before recovering.  Over the next three to six months, we expect there to be fewer sales and the longer the period of interest rate changes, the longer that time of supressed sales will last.

Here’s what happens to the price of real estate.

The next specific question as to how rising interest rates impact real estate is the big one – what happens to the average sale price during a time of interest rate increases?

It’s a hugely important question and also a very difficult question to answer.

The primary reason for this is because increasing interest rates often go hand in hand with changes in government regulations related to real estate.  The last time we saw such a combination was back in April, 2017, when in response to a frenzied real estate market, the Ontario government of the time introduced the Ontario Fair Housing Plan with 16 measures designed to cool the housing market.

If that sounds somewhat familiar, it might be because in February, 2022, the Ontario government of the time released a Housing Affordability Task Force Report with 55 recommendations on how to cool the housing market.  That turned into the More Homes for Everyone Plan that was released on March 30, 2022.

The combination of higher interest rates and government policies designed to increase supply and ameliorate demand adds up to uncertainty for buyers and sellers.

In a time of uncertainty, you have buyers who worry that they could overpay for the property and see it lose value over time, and sellers who refuse to believe that their home is worth less than a neighbour who sold in a less uncertain time.

Let’s be clear here – in times such as we’re currently experiencing, buyers quickly become more cautious and sellers take a while to come to grips with the new reality.  We see that translate into fewer sales as the bargaining zone between buyers and sellers becomes much narrower.  Following a period of adjustment, we see an initial wave of sellers accept that the price they had hoped for based on past sales may no longer be reasonable.  As new sales take place that reflect the new average price for a given market, the sellers that enter onto the market come with new, lower expectations.

When we look at the start of 2017, we see the average price play out in exactly this fashion. 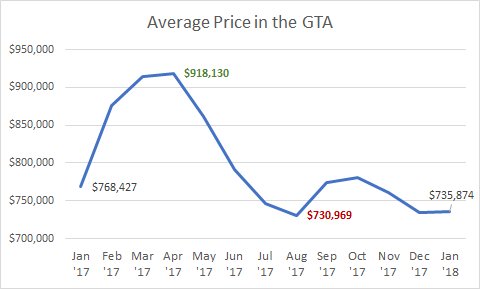 In November, 2016, we had the lowest interest rates we’d basically see in Canada, with a five year fixed mortgage averaging just 2.09%.  Prices starting skyrocketing, with fierce competition for what was on the market as buyers flooded the market.  By February, 2017, mortgage rates had risen to 2.42% and by March, the steam had gone out of the market.  It hit a high for the year in April of $918,130, but the mortgage rate increases and government policy changes had influenced the market and we saw prices drop back down until August, when it hit a 2017 low of $730,969 on average in the GTA.  We ended the year down about $30K from the average price back in January 2017.

The above data is for all housing types and includes all price points within the GTA.  It differed somewhat based on geography and housing type, but the story was largely the same.

When interest rates rise, particularly when combined with government policy change, there is a period of slowing growth, plateauing and then the average price drops.  The extent to which it will drop and for how long before it recovers is a function of how long the interest rates continue increasing as well as other macro economic factors.

Here’s what is coming next.

No review of our current situation can be complete without looking to see what else is coming in 2022.

If interest rates continue to rise, then it appears likely we will a prolonged period of average price drops.

The scheduled dates for the interest rate announcements for 2022 are as follows:

With inflation at a 31-year high, there are many people speculating that the June 1st interest rate announcement will be at least another ½ percent increase and perhaps even higher.  A lot can change in the month and a bit before we hit that date, but it seems extremely likely we will see another increase on June 1st.  This will directly impact the variable rate for mortgages, and while lenders don’t always pass on the full change, it seems likely they will do so this time around.

On the fixed mortgage rate side, those rates are directly influenced by Bank of Canada bond yields.  This is because bond prices and mortgage interest rates have an inverse relationship with one another. That means that when bonds are more expensive, mortgage rates are lower. The reverse is also true – when bonds are less expensive, mortgage interest rates are higher.  Given the Bank of Canada is now in a period of quantitative tightening, we would expect fixed mortgage rates to increase as well this year.

With both fixed and variable rate mortgages going up and predicted to go up more in 2022, buyer purchasing power is eroded and this directly impacts how much a buyer is able to qualify for with a mortgage.  The lower the demand, the more we expect prices to stagnate or drop.

We are already seeing a change in the market conditions within the various parts of the GTA.  In Toronto, our sales to new listing ratio is approaching a balanced market for the first time since the start of COVID.  We expect to see it go into officially a balanced market (with 55% to 60% of properties on the market being sold in the month) in April and if things continue as they currently are, we may enter a buyer’s market in May or June.

It’s a complicated time to be buying or selling real estate and more than ever, you need to be working with real estate agents who don’t simply shrug when you ask them what’s coming next.  We pride ourselves on looking out for our clients as we’re looking for a buyer or seller for them.  If that sounds appealing, don’t hesitate to get in touch!